There are certain foods which are considered to be the ideal COPD diet. (COPD is an acronym for Chronic Obstructive Pulmonary Disease). These foods are said to help with this condition which causes severe breathing problem consequently making patient require oxygen supplementation.

The main negative characteristic of COPD is that it cannot be cured nor reversed. Hence patients need to take up measures to manage the ailment. Among the most ideal ways are diet change to include foods which can give our bodies the necessary energy and help in controlling the condition and some of the lifestyle changes that go with it.

Some of the food we consume in normal situations affects metabolism and breathing so the ideal COPD diet is one which involves avoiding the foods that might be working against efforts to control the disease and also those that can catalyze it.

Fluids in a COPD Diet

Amongst the foods that are considered to be ideal diet include consuming a lot of beverages and liquids. This means that a patient should consume significant quantities of fluids in a single day so as to help the body function property. The primary role of the fluids is to help the body produce thinner mucus and hence make it easier for patients to cough and brow their noses. This is important since if the mucus is thick, then it is not easily removable resulting to blocked noses which increases the already existing breathing problem. However patients who also have heart problems should regulate the amount of liquids they consume. The beverages consumed should also exclude alcohol since it is known it slows breathing through making it hard to cough up mucus.

Foods rich in fiber are also ideal for people with COPD because it helps with the digestion and absorption of the other forms of food. The fiber gets into the digestive tract and smoothens up the digestion process by settling on the lining and also moving the food efficiently. As a result the patient rarely suffers from constipation which is a known way of the body failing to absorb maximum energy. Amongst the foods that have high fiber contents and can help patients include cereals, fresh vegetables, brown rice, fresh fruits, whole grain bread and whole grain pasta amongst others.

Calories in the COPD Diet 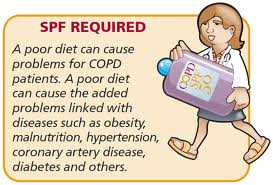 Another usable type of food is calories which is an energy giving ingredient. This is important because a person with COPD needs all the energy they can get to help their bodies remain strong not only to help with the condition, but also to enable the body repel any other form of opportunistic diseases. Furthermore, bodies of such patients need to have sources of extra strength since the condition weakens the body where patients might even not be able to perform normal day to day activities.

However the calories intake in the patients’ diet should be moderated especially to people with weight problems. This is because excess calories can lead to gaining of extra weight and also undermine any efforts to try and moderate the weight.

The ideal ways of moderating the calories intake include getting advice from a professional doctor on the recommended quantities that should be consumed and at what intervals. Patients should also ensure that they check the percentages of calories especially when using packed foods.

Proteins in the COPD Diet

Proteins are another important ingredient in the diet of a person with COPD. This is especially to patients who exercise regularly and hence need to have components that can replace the energy lost while in the gym. Proteins also help the body of the patients to be able to fight infections by helping the body produce essential antibodies. Amongst the ideal sources of proteins include; legumes, poultry, dairy products, milk, eggs, soup, meat, fish and dairy products. However just like other foods can be harmful if taken in excess quantities, protein also needs to be used in moderate quantities.

Calcium is also important in such diets because not only does it help strengthen the bones, but also works with magnesium to help in blood clotting. As a result the patients readily participate even in hard activities since their bones have the necessary strength. Amongst the best sources of calcium include various forms of daily products either processed or not. However it is paramount to ensure that the daily products do not have the harmful ingredients that can undermine the efforts of trying to manage the condition.

Phosphorus in a COPD Diet

Phosphorus is also essential to the body of a person with COPD since it is the component that plays a major role in formation of body cells. These cells are the one that determines how weak or strong a body is depending on the number of cells. The cells are also important to the body since they are the ones responsible for repairing any part of the body. Thus patients should ensure that the food they take have sufficient percentages of the blood cells’.

Sodium in a COPD Diet

Sodium is one of the components that are known to counter the efforts of controlling COPD. The places where sodium is available in abundance include in table salt which is primarily made of sodium chloride. Hence if a patient with COPD experience shortened breath, blood pressure rises and body fluids are retained. This make the patients have thick mucus consequently making the situation worse. Hence patients of this condition should avoid using salty foods or putting too much salt in their food.

Among the measures to apply so as to use as less salt as possible include; avoid packed foods that have more than a hundred and forty milligrams of sodium and instead go for the foods which are usually marked low sodium and also avoid adding salt to food while cooking. Amongst the foods with low sodium content include; smoked meat, regular frozen food, salted snacks, regular processed cheese and soy sauce.

It is evident that COPD is a condition which requires proper combination of different foods so as to property maintains good health and also avoid complications. However it is also evident that usage of some foods can hinder the managing of the condition. With a proper usage of the foods and combining with other activities such exercises, patients of COPD can readily control the condition.