Exacerbation of COPD refers to a clinical condition featuring suddenly worsened chronic obstructive pulmonary symptoms. COPD is a group of disorders manifesting with some common symptoms like shortness of breath, chest tightness and productive cough. When these symptoms become severe suddenly, the medical condition is termed as COPD exacerbation.

Causes and Triggering Factors of Exacerbation of COPD

Several factors give rise to exaggeration of chronic obstructive pulmonary diseases. Major causes complicating COPDs are respiratory infections due to bacterial and viral spreads, air pollution and pulmonary embolism and idiopathic initiation. In one third of these cases, the triggering factors are absent or cannot be justified. Some patients are prone to allergies to certain molecules and feature anaphylactic reaction which is presented as exacerbation of COPD as well.

Some patients have presented with worsened cases of COPD; after investigations failure of drug therapy turned out to be the triggering factors in these cases. These all are common issues that can give rise to life threatening lung incompatibilities. There are many other indefinable factors too; but they can’t be associated with any symptom and hence not included into major causes.

Signs and Symptoms: How to Detect Exacerbation of COPD Cases

COPD itself is a group of pulmonary diseases that require tertiary level medical attention. When COPD complicates with severe symptoms, it gives rise to a life threatening medical emergency. COPD can be defined as chronic obstructive pulmonary diseases characterized by shortness of breath, chest tightness and productive cough with sputum. Emphysema and Chronic bronchitis are considered as COPDs. Where exacerbation of COPD cases present, these symptoms turn into severe medical features. So the signs and symptoms can be listed as:

How to Prevent Exacerbation of COPD (chronic obstructive pulmonary disease)

Exacerbation of chronic obstructive pulmonary disease can be partially prevented. The principles of prevention refer to reducing or debilitating the triggering factors. Early diagnosis and treatment of respiratory infections and pulmonary embolism are effective strategies to prevent worsening of COPD symptoms. 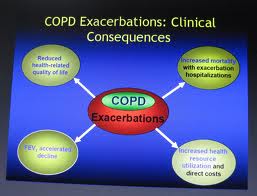 Simultaneously, the patient must take counseling from the professionals about the other factors present in the environment and how they can manifest into acute exacerbation symptoms. The patients should be well-informed about the consequences of drug therapy-failure cases. They should know about their allergic traits, genetic anomalies and the molecules that may act as allergens to their immune systems. Exposure to polluted air is one of the major reasons of complicated COPDs in developing countries. Hence, ensuring a pure air-environment should also be taken under consideration.

Some Important Points to be Noted for Preventing Exacerbation of COPD

How Exacerbation of COPD Cases are Treated: the Effective Methods

Various treatment methods are being used to manage acute COPD related medical emergencies. In cases of exacerbation of COPD, the basic outline of treatment can be presented as:

Management of COPD Exacerbation Cases: Care at Home and Hospitalization to Handle Emergencies

COPD cases are well managed at home after medical follow up and conservative treatments. However worsening of the signs and symptoms require emergency medical care. That’s why experts suggest immediate hospitalization after acute attack of exacerbation of COPD. The treatments follow the standard protocol and the patient is provided necessary support for recovery. The management procedures can be divided into two major stages:

Some Statistics on Exacerbation of COPD