COPD Disease » how is copd different to athsma

There are many differences and similarities of COPD vs asthma. In most parts of the world, the two diseases are regarded as killer diseases especially COPD since it affects the elderly people who are seen as weak when fighting certain diseases. Recent research findings show that people who are infected with COPD realize late when the symptoms are so advanced hence making it hard to treat the condition. It was also noted that it is misdiagnosed thus it is a threat to the infected persons. As for asthma, people are more aware of the disease and when it is diagnosed early enough can be treated.

Chronic obstructive pulmonary disease (COPD) is a condition that mainly affects the airways. COPD is defined as a slow and progressive disease that is characterized by the airways becoming inflamed and filled with mucus causing difficulties in breathing in and out hence reducing the amount of oxygen inhaled. The symptoms of copd are hard to note thus most patients only recognize them when it is already too late for them to reverse the impact. COPD leads to the damage of lungs which is hard to counter once it has taken place. 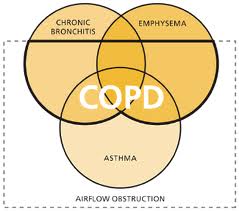 Asthma on the other hand is a condition that is characterized by restricted and swollen airways which fills with mucus hence making it hard to breath. As opposed to COPD, asthma is triggered by allergies and in case there is damage to the lungs, it can be reversed or managed by following medication. Asthma is also known to mainly affect children and those in their early adulthood or those in adolescent stage. In some people, the condition is not genetic and cannot be inherited from other family members.

Treatment. Though both diseases may coexist together and have almost the same implications, the forms of treatment are different. A person suffering from copd is not likely to get any medication that can fully treat it rather they can only relieve the situation. Those suffering from copd are encouraged to stop or discontinue the use of tobacco as it accelerates the condition and makes it severe. As for asthma, it can be treated hence they can experience almost normal breathing. Some of the medications that are used to treat asthma include inhaled steroids, short-acting bronchodilators and long-acting beta agonists. Copd can only be treated using strong antibiotics which only help to reduce the implications and not to completely treat them.

Age. As most of the people who suffer from asthma, the condition will mainly affect them during the early ages and at adolescent. Children are more prone to asthma as compared to copd. COPD on the other hand will mainly affect people in their old age and as from about 40 years of age.

Causes. The causes of asthma are different from those of COPD and vice versa. As for asthma, the condition is brought about by allergies, environmental conditions, pollution, pollen dust, cigarette smoke and many others. On the other hand, COPD is as a result of exposure to chemical fumes, pollution and smoking of tobacco. As for copd, it is really hard for it to be diagnosed as the implications will only be seen at later stages in life. People who are suffering from copd are advised not to expose themselves to chemical fumes or tobacco since they only make the condition to get worse. It is also through this way that they are able to counter the implications caused by the disease.

The health implications. COPD causes lung damage which is not reversible. Once the lungs are damaged there is not treatment that can be used to reverse the condition. The only way out is to stop smoking tobacco, avoid polluted areas with chronic gases and chemical substances. As for asthma, it may cause lung damage but can be treated and curbed. Patients suffering from copd cannot get full relief from the condition but for asthma patients, they can be treated and be fully relieved from the condition.

The above are the major differences on COPD vs asthma. Though there may be others, the above are most common. The two conditions also have similarities that define them.

COPD vs asthma- The Similarities

I) They both affect the respiratory system. Both diseases are chronic and they affect the airways. They both lead to the swelling of the airways hence leading to the airways becoming blocked. This then results to hardship when someone is breathing.

II) They are both characterized with wheezing and coughing. People who have asthma will cough mainly in the morning and at night. The prevailing weather conditions can make the situation worse. They will also tend to wheeze a lot as they try to gasp for breath. As for copd, patients will also experience coughs throughout the day and nights. The coughs in people who are suffering from copd are persistent. It is also important to note that not all persistent coughs should be seen as symptoms of copd thus it is important to go through a thorough screening and diagnosis.

III) They can both be caused by smoking, exposure to chemicals, pollution or pollen dust. When smoking, a lot of the nicotine is inhaled thus this can lead to damage of the lungs. In manufacturing industries, fumes that are produced can also lead to infections in the respiratory system. The fumes may contain harmful chemical substances which when inhaled lead to problems with the respiratory system. Both conditions can be accelerated by the prevailing conditions that one is exposed to. This is the reason why people who suffer from copd and asthma are advised against exposing themselves to such conditions.

All in all, COPD vs asthma are two health conditions that pose great threat to life. It is advisable that people take precautions when they notice or become diagnosed with the conditions. This will help them access help and get medication early enough and prevent the disease from becoming severe when it is still early.