What Causes COPD – The Most Common Reasons Why People Get It

Understanding what causes COPD is the foremost step in combating the malady. It is a life threatening lung disorder, said to have affected more that 50 million people around the globe. Chronic obstructive pulmonary disease is a combination of some respiratory illnesses such as bronchitis, emphysema and asthma. It is therefore a subset of different pulmonary diseases that degenerate the lungs and destroy surrounding tissues as well. It is important to note that COPD involves a combination of any two of the three above mentioned obstructive lung diseases.

In this editorial, we are going to discuss what causes COPD as well as symptoms that can be used for prognosis.

There are four common causes of COPD. This includes breathing difficulty due to any type of exertion and a reduction in airflow, in and out of the lungs. Most of these causes are from long term exposure to irritations that damage the lungs as well as the airways. On the other hand, its prevalence may be influenced by race, ethnicity, gender, environmental factors and genetic factors.

Most Common causes of COPD.

This is the number one in the list of what causes COPD. When the smoke is inhaled, it causes irritation on the lung cells leading to inflammation and thus difficulty in breathing. The smoke also stimulates the lung cells to secrete enzyme elastase that is known to ignite the breakdown of elastic fibers in the lung tissues. When these fibers are broken down, the lungs become rigid and accommodate lesser and lesser air volumes; in other words their capacity to hold air drastically reduces.

Environmental tobacco and passive smoking has the same effects. Other factors that can cause the development of COPD in the same fashion include exposure to harmful chemical fumes, dust particles as well as air pollution. Pollutants such as nitrogen dioxide, sulfur dioxide and other particulates present in cleaning products and paint may worsen the COPD and cause exacerbation.

Infection in the respiratory tracts are not surprisingly a factor in what causes COPD. When mucus and other substances are not cleared from the throat, they develop a favorable breeding ground for bacteria. This kind of viral and bacteria prevalent conditions leads to the development of respiratory diseases like asthma, bronchitis and emphysema. Bacteria that are found in the respiratory system include;

Actually, 10% of COPD cases are reported to be as a result of atypical organisms such as Chlamydia pneumonia.

Influenza, rhinoviruses, adenovirus, coronavirus and parainfluenza respiratory virus are some of the most common virus found in the respiratory system. They either cause infections that inhibit the free flow of air n and out of the lungs or cause the airways to harden thus accommodate limited air volumes. They thus cause COPD as well as aggravate any prevalent respiratory condition. In extreme cases of copd exacerbations, one of the causes found were the Pseudomonas species of virus.

Apart from asthma contribution to COPD as mentioned above, people who suffer from asthma have high chances of suffering from the ache. This is a long term chronic illness that inflames and narrows the respiratory tracts. Asthma patients are also constantly on medications like corticosteroid inhalers and antibiotics for a long period of time, and these medications can cause lung irritations, thus lead to the development of other obstructive lung afflictions.

Hereditary diseases such as alpha – 1 antitrypsin deficiency is also said to cause COPD. This is a genetic condition, characterized by low levels of antitrypsin; a protein made in the liver.

Why Many People Suffer From COPD 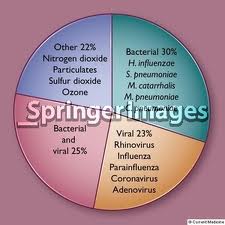 Having explored what causes COPD, the only question that remains in our minds is why so many people acquire it. This question can be answered in one sentence. Many people do not know how to diagnose COPD and thus do not seek medical attention during the early stages. They also do not know what causes COPD and thus do not avoid exposure to danger and instead engage in habits that expose them to the factors that cause this lung irritation. Seeking medication at the early stages helps curb the disease as well as avert its more life threatening symptoms.

Equally important, COPD has slow onset of symptoms therefore most of its sufferers do not realize the changes that are taking place in their bodies and how they compensate for these changes. The combination of the three different conditions known to be influential in what causes COPD can mutate to take different forms and thus make it very difficult to recognize what the real problem is. In many cases it leads to misdiagnosis and thus under treatment which may result in a deterioration of the patient.

Once the condition has been diagnosed a medical professional can provide a prognosis. They do this by identifying the different symptoms of the disease and consulting medical research. Here are some general guidelines:

After continued exposure to lung irritators for a period of say 20 years, symptoms such as constant coughing, frequent respiratory infections as well as dyspnea (shortness of breath) begin to develop. In cases of emphysema, dyspnea is the primary symptom, mostly experienced when the patient is involved in physical activities or excitement. However, under severe conditions of COPD, the dyspnea might occur even when resting.

Chronic bronchitis on the other hand depicts symptoms like constant coughing and sputum production. This can develop into chest infections which cause rapid coughing, shortness of breath, fever, wheezing or the production of a discolored and cloudy sputum. Other symptoms depicted by COPD include:

Due to oxygen deficiency, you may notice a bluish discoloration of the lips as well as nail beds, commonly known as cyanosis. The person suffering from COPD may also experience migraines especially in the morning, loss of weight as well as anorexia. If these symptoms are experienced, it is of great importance that you visit the doctor for tests such as CT scan, X-ray or PFT (pulmonary function test) to ascertain if you are suffering from COPD.

It goes without saying that the way to prevent this malady is to be informed and avoid what causes COPD. The afore-mentioned factors serve as an important guide on what to avoid if you want to successfully combat this affliction. Steer away from smoke, allergens and other pollutants that may be associated with what causes COPD. Ensure that you are aware of the signs and seek the expertise of a medical practitioner if you suspect any symptoms.

Exacerbation of COPD – A Comprehensive Guide

Exacerbation of COPD refers to a clinical condition featuring suddenly worsened chronic obstructive pulmonary symptoms. COPD is a group of...